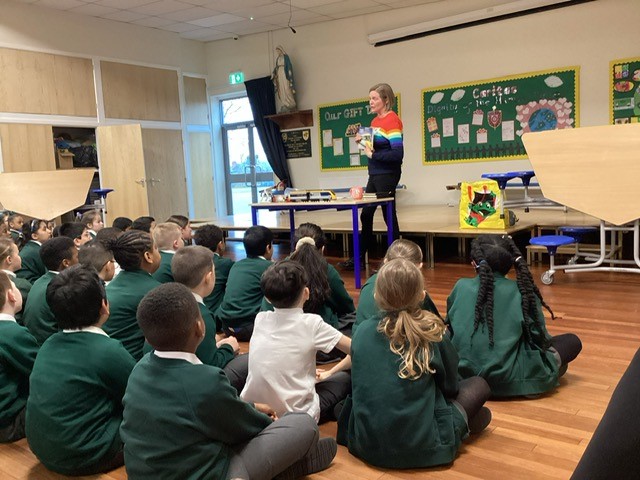 Two women with successful careers in STEM (science, technology, engineering and maths) spoke to pupils from years five and six at St Kentigern’s RC Primary School in Fallowfield, as part of the annual global STEM week held to promote careers in the sector.

Naomi Timperley co-founded Tech North Advocates and GSI, two expert groups of technical and digital consultants. She has been featured in Computer Weekly magazine’s list of top 50 most influential women in UK IT for the past four years in a row and has extensive experience in helping new businesses in the tech and digital sectors. The children were very keen to hear all about the steps they could take to forge their own careers in STEM sectors.

Stella Smith is a design engineer with Transport for Greater Manchester (TfGM), currently working as a project sponsor for Metrolink. Stella studied civil engineering at Newcastle University and worked in New Zealand and Ghana before becoming part of the TfGM team delivering the Trafford Park Metrolink extension. She told the pupils how flexible transport engineering is as a career option, and how proud she is to point out her work to her own children. “There’s a huge shortage of engineers in the UK so there’s always work to do,” she said.  “And it’s great to be able to point at a new tram line or station and say, ‘mummy did that at work’ to my children!”

A school spokesperson said of the talks: “Naomi was a very popular visitor who our children found very impressive. She was particularly kind and gave advice to individual children who were interested in digital careers.

“Stella was an amazing speaker and really engaged the children. Our children asked if we could go to see her at Metro next year and left her talk with a real sense of what they could achieve using STEM.

“I would highly recommend State Talking speakers to any school.”