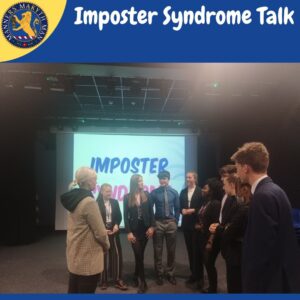 Katie Leeson was a highly successful managing director of a social media agency – and yet she spent many months wondering why she had been given the job and was convinced she was doing it badly.

“Imposter syndrome is described as a feeling of phoniness in people who believe that they are not intelligent, capable or creative despite evidence of high achievement,” Katie told 120 year 13 pupils at an event organised by State Talking. “While many people are highly motivated to achieve, they also live in fear of being found out or exposed as frauds,” she said. Katie explained that, despite being highly qualified and with a successful career in media, marketing and business operations, she often felt shy and would even try to hide in meetings, hoping she wouldn’t get asked a question she didn’t know the answer to.

The feelings became so bad, that Katie, a former student at The Blue Coat School in Oldham, sought therapy to work through her negative thoughts and to try to identify where they came from. “I realised that what came to mind when I thought of an MD was an old man in a grey suit,” Katie told pupils. “Where does that come from? Well, society has me believing I shouldn’t be in this role.”

Katie illustrated her point with a screenshot from Google Images, which showed pages of men in suits in response to a search for ‘managing director’. “This made me angry and my fear of being caught out as an ‘imposter’ turned into determination to make a change,” she told students. “Embrace being imperfect and find enjoyment in doing things differently,” Katie urged. “Don’t claim to know everything – it’s liberating to own not knowing everything, because then you don’t worry about being found out.”

Head of year 13, Natasha Kinder, asked State Talking to organise the motivational talk for year 13 ahead of their A-levels. “It was great for them to hear Katie’s inspirational story, especially at such an important time as they embark on the next stage of their school careers,” she said. “It also allowed us to realise that there are many careers to choose from, which was really useful.”