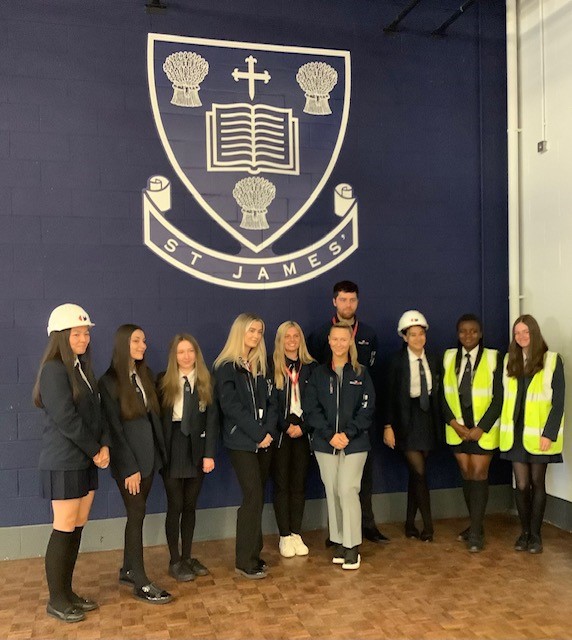 Women in Construction event draws a crowd at Stockport school

Students at St James Catholic High School in Cheadle Hulme were treated to an ‘inspirational’ introduction to the world of construction by apprentices from a leading regional building contractor. Girls in Year 9 heard from Russell WBHO Building Student trainees Megan, Isabelle, and Lydia who are all completing the second year of their training programme.

At just 20 years old, the apprentices are relatively recent school leavers themselves and are new entrants to the construction industry having joined Russell WBHO in 2020 after their A-Levels. Each secured a place on the award-winning Building Student training scheme which provides them with a hands-on professional apprenticeship alongside a fully-funded five-year degree at the University of Salford.

The careers seminar was organised by State Talking, a Manchester education charity which brings relatable role models into state schools. The Women in Construction focus was specially requested by the school as part of their bid to remove preconceptions and give students the opportunity to follow whichever career path they choose.

The trio spoke to students, who will begin preparing for their GCSEs in September, about the changing image of a traditionally male dominated profession. They discussed their own choice of a career in an industry where only 14% of employees are female, and their own experience of seeing more women now going into careers like surveying, construction project management and civil engineering.

Megan said: “Construction is often overlooked as a career option for girls, despite many female students having a preference for STEM subjects. It feels very important for me, as a young woman starting out in the field, to talk to others about my experiences and aspirations. I think the St James students were very interested and I hope we have broken down some barriers and stereotypes today.”

Dominique Rarity, careers lead at St James, said: “Megan, Isabelle and Lydia gave an excellent talk to our Year 9s and really gave them some food for thought. External speakers play a vital role in our careers programme at St James. There is nothing like hearing from someone with real world experience to bring a career to life. The apprentices were very down to earth and made it possible for our students to see themselves in their shoes and consider careers in construction.”

Fran Kennedy, State Talking founder, said: “A recent survey from housebuilder Redrow found that just 29 percent of young women have received advice about careers in construction, compared to 40 percent of young men. There’s absolutely no reason why that should be the case and we’re doing our bit to address that gap with inspirational visits like this one today.

“State Talking matches state schools with relatable and inspirational role models and our mantra is ‘if you can’t see it, you can’t be it’. This fantastic group of young women have engendered that ethos for us by delivering this fantastic talk which, I am confident, will have sown the seeds of some future careers in construction among the girls of St James’ High.”

Russell WBHO is one of the North West’s leading main contractors, responsible for some of Manchester’s most recognisable buildings. The company is State Talking’s main sponsor, as part of its Social Value commitment to generating genuine improvements for local young people.

Andrew Russell, joint managing director of the Trafford-based firm, added: “The construction industry has a skills gap and a perception problem, both of which we’re working hard to tackle.

“Our partnership with State Talking, combined with our Building Student apprenticeship programme, allows us to affect real change by promoting the industry to a more diverse potential workforce and giving young people a better understanding of the opportunities open to them.

“We strongly believe in State Talking’s mantra and the charity’s approach of engaging directly with young people as they make important life choices, thereby hopefully inspiring and encouraging them to see themselves among our next generation of construction professionals.”